Yeah, I know this is not a Sportster but this is my next project. This 1992 Harley Davidson 80″ Evolution motor was replaced with a 96″ S&S motor in my 1992 Heritage Softail many years ago. It has been sitting on the garage floor waiting for me to get around to doing something with it. A few months ago I almost decided to sell it. It needs some TLC and I just wasn’t sure I would ever get to messing with it.

Last week I put it on a stand and cleaned it up a bit. Some inspiration hit and I decided I would start working to bring it back to life and use it as the base to build a bike. This will likely be a long term project. I am just starting to work out what I want to do.

Here are some of my ideas of what I want to do for this project:

Engine
A stock 1992 Harley Davidson 80″ Evolution motor. This motor has seen a lot of miles and was running when it came out of the Heritage. It has a pretty good base gasket leak on the rear cylinder. When I start getting into her I am sure it will probably need a top end rebuild. 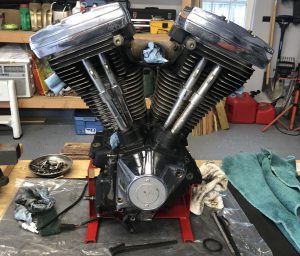 Transmission
Probably a stock 5-speed, nothing fancy here. I may research what it would take to do a kicker on it. Maybe it will be only kick-start.

Primary and Final Drive
Primary drive will be an open belt, no question on that. Probably a 2″ belt. Just like the look of them. The final drive will likely be belt as well, but I may go with chain.

That is what I have been thinking about so far. There will be a lot of other stuff that will need to be worked out – ignition, controls, wheels, brakes, etc. Pretty much in the dreaming phase right now.

The motor is on a stand and on the bench so that it is no longer collecting dust in the corner of the garage. Have a couple things I am going to do to my 2014 Street Glide first, then I expect to get elbow deep in this project over the winter.

This project will likely push the limits of my abilities but I am looking forward to doing as much of the work myself as I can. Will probably make a lot of mistakes and screw some stuff up, hopefully there will be more successes than failures. Looking forward to it.

Just like the 1990 Sportster Project I will be posting my progress on this blog. Any thoughts, comments, tips or suggestions on how this might go are welcome. Just post them in the comments.