I picked up a passenger seat for the EVO project on eBay. It is a take off from a Dyna Wide Glide or some other Dyna model. It was pretty in-expensive (less than $40), especially since it is an actual Harley OEM seat. The seat did not include any mounting hardware. Harley does not make the seat anymore, more importantly they do not make the shoulder bolt (OEM #7321) which attaches the front of the seat to the fender. I checked with a couple of Harley shops, searched aftermarket sites, and eBay but I could not find the bolt.

I checked the local auto parts and hardware store to see if they had a shoulder bolt which might work. Didn’t find one. I did find a 3/8 x 16 flange bolt which would fit in the keyhole on the seat. 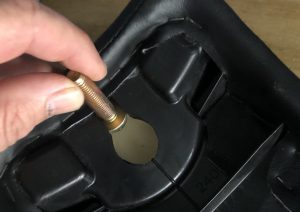 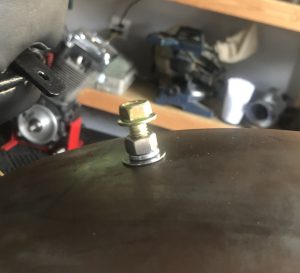 Yep I think that’ll do it. Works like a charm.

I picked up a rear seat mount from somewhere (I think eBay). It came with a rear seat fender nut, a couple of nylon clips to hold it in place, and the knurled seat rear screw. Drilled a 7/16″ hole in the fender. There is a key on the fender nut to keep it from spinning when you screw in the bolt, I used the dremel to make the notch for the key. 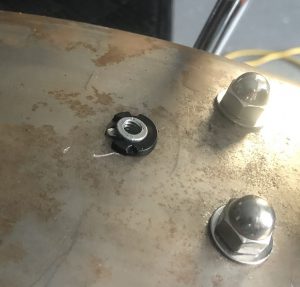 You can see where I slipped with the dremel while carving out the key indent, it should sand out when I prep things for paint. The nylon clip holds the fender nut in place.

The rear mount bracket on the seat was really long so I cut it down to the size I wanted and drilled a new 1/4″ hole in it for the mount screw. 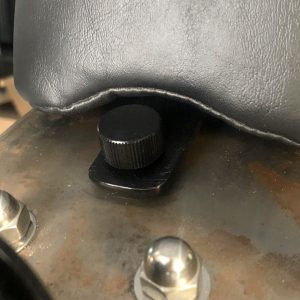 The keyhole in the front of the seat slips over the flange bolt and the knurled seat screw attaches the rear seat mount to the fender. 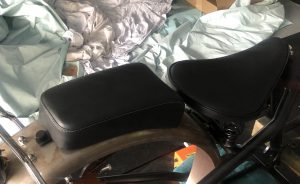 I think those were the last holes I needed to drill in the rear fender, so time to tear it back down and paint it.