I started this project many months ago after finishing up the 1990 Sportster Project. I had a 1992 Evolution motor which came out of my 1992 Heritage when I replaced it with an S&S 96″ motor. The motor was worn out, had nearly 200 thousand miles on it, and had been just collecting dust in the corner of the garage for a bunch of years. Since I am getting things finished up figured I would write up an overview of my 1992 EVO project journey.

This is a long post, so for you TL;DR types; I built a motorcycle in my garage, it wasn’t easy, I learned a lot, it goes, I think it’s awesome 🙂

I finally got the last few things I was waiting on (they took the long way): the front brake setup, brake line, and kickstand. Didn’t take long to get things finished up and it looks fantastic (if I do say so myself). 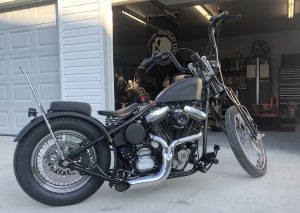 Just like with working on the 1990 Sportster, I learned a lot with this project! I did a lot of things I had never done (or even thought about doing) before. The top-end rebuild was something I didn’t think I had the skills to do: from the teardown, to honing the cylinders and assembling the pistons, to lapping the valves and getting the heads put back together, to getting it all put back together, to finally crossing my fingers and hitting the start button. 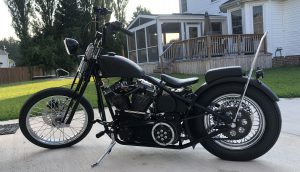 If you haven’t been following the project or in case you don’t remember this is where I started out… The 1992 Harley Davidson Evolution Motor from my FLSTC torn down for the top-end rebuild. 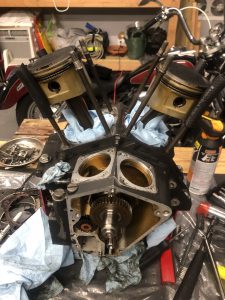 I also learned a lot of other interesting handy things along the way like mounting the tires on the wheels, wiring (crimping terminals and such), and welding on different pieces and parts. I did every piece of the project myself (with a lot of help from Google and YouTube). Lots of trials and lots of errors, a few mistakes and more than a couple failures, along with lots of successes and lessons learned. Is it perfect – not even close but I think she looks pretty good and she runs like a top.

The second start up (I did not video the first time I fired her up, just in case something went horrible bad)…

What you do not see here is after I recorded this I was dancing around the garage like a crazy person 🙂 I did that! I made that work.

I set out with a budget for the project and I pretty much stuck to it. I kept pretty decent record of what I spent and where things came from (it is probably a couple hundred off – but it is pretty close). One thing I will say is if you are using new stuff don’t expect things to be cheap. I mean with what I spent on the bike, I could have bought a good used running/riding motorcycle. The difference is, this one is mine – I built it and I learned a lot. It was not so much about the cost or being able to build it cheaper than buying it, it was more about the experience and education; I would probably have spent whatever I needed to in order to get it going. My next project will be even better because of it and I learned a lot of things that will help me in the future; like I will never pay to have a tire mounted on a bike again.

Just like anything you do, you get out of it what you put into it. I have put a lot of time (and money, and blood, and sweat, and a few tears) into this and enjoyed every minute of it (even when things did not exactly go how I wanted them to or expected them to). I think the results are awesome; at the end of the day that is really all that matters. 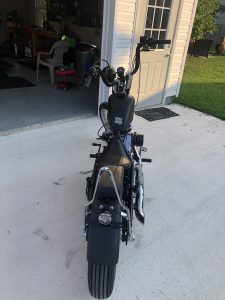 I started with the worn out motor and have bought a bunch of parts and pieces over the course of the project. Here are a few of the places I picked up the things I needed:

Nick and Allison are great!!!

Lowbrow Customs is a great place for lots of cool and interesting garage bike building stuff. I picked up the air cleaner, choke bracket, carb bracket, headlight, tail light, and a few other things for the project from Lowbrow Customs. They have some great stuff you won’t find anywhere else. Lowbrow customs also has a great YouTube channel which is entertaining (I especially like Todd’s videos – he is crazy knowledgeable and hilarious.) with lots of tech tips. Learned how to mount the tires watching the Lowbrow Customs YouTube channel. I check their clearance/specials section pretty regularly and have picked up some cool stuff.

Parts used on the project from Lowbrow Customs:

J&P Cycles has always been one of my go to online shops for parts and such. Most of the parts (gaskets, rings, oil lines, and such) for the evo motor rebuild for the project came from J&P Cycles along with the cables and brake lines. Large selection and easy to search for stuff based on the year and model of the bike. JP Cycles’ support is also fantastic. If you have a question about a part (does it fit, is it all you need, etc) there is almost always someone available online to chat with and get you the answers you need. If you buy a bunch of stuff from them join the J&P Cycles Gold Club and get discounts and free shipping.

Parts used on the project from J&P Cycles:

All of these folks were great to deal with, highly recommend each of them.

Other stuff for the project I found on eBay. The transmission, starter, brake rotors, pushrod covers, CV carburetor, final drive sprockets and chain, petcock, horn, wiring harness, solo seat, and other odds and ends were all eBay finds. Some of it new, some of it gently used. I am a terrible at eBay… I search and search for the best price and almost always find a better price right after I order something. All good, all my experiences with eBay sellers have been really positive.

Just a little advice if you are going to start tinkering on your own project. Do it!!! Do a lot of research, there is a ton of great stuff out there on YouTube. Don’t get discouraged when something doesn’t work out. Don’t be afraid to try something new. Learn as much as you can and have fun!

I still have a couple of minor things to figure out, I can’t seem to get the spacing for the speedometer drive on the front axle figured out, so it is not hooked up yet. Other than that and a few minor cosmetic things she is road worthy and ready to ride…

Huge shout out to my wife for helping me out with things which required more than two hands and for putting up with me when I got frustrated. Thank you Sandy for letting me tinker around on things. Also to my grand daughter, Azalea, for keeping an eye on things and making sure I did it right. 🙂 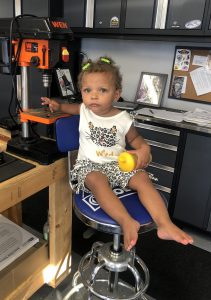 She’ll be wrenching and riding before we know it.

The title of this post includes “the finish line”, but if you tinker on, or ride, motorcycles you know they are never really finished, there is always something to change or something to fix. Would I do this again? Hell yeah! I am already looking for the next project… Thinking about a proper chopper – maybe powered by an Ironhead Sportster (I would really like to have a pre-AMF era bike), or maybe a metric bike… hardtail, longer front end, questionable brakes, more swap meet finds than new parts…

I’ll get started on the next project soon enough. I have a couple of things I want to do to the wife’s Jeep, a Iron Butt ride planned in August, and some more upgrades on the 2014 Street Glide, but for right now it’s time to take her out for a ride!