Hope everyone had a great 4th of July Weekend. Mine did not go exactly as planned. Had hoped to take a ride with Sandy on Saturday and then work on the Sportster a bit on Sunday. On Friday night my son, Johnathan, was headed home down Nansemond Pkwy, he and his CRV had an encounter with something in the road way. He thinks it was a bear. He is fine, he says the animal (bear) walked away, but the CRV did not fair so well. We ended up spending the weekend working on his car so he would have it for work on Monday.

He called me at about 10 PM on Friday and said he had hit a bear. His Honda CRV was overheating and fluid was pouring out from underneath the car. My wife and I went up the road to check on him, he was only a few miles from home.

There was not a lot of visible damage on the outside. The plastic bumper cover was kind of shifted out of place, but behind it things were pretty screwed up. It wrecked the condenser and radiator. We had to call for a tow. The tow truck got there about 1:30. 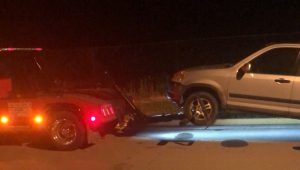 Saturday morning we pulled all the plastic trim off the front. The condenser and radiator were pretty much destroyed.

A beam across the front was bent and had basically broke both the condenser and radiator off where they sit in the frame. 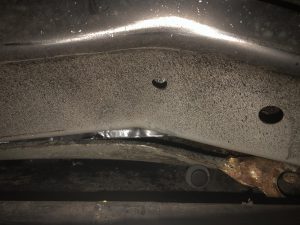 Got it all tore apart and cleaned up. 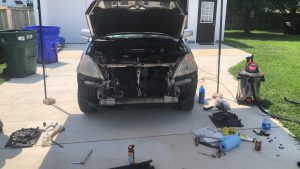 Checked local Autozone and they had the radiator and condenser in stock.

We were able to hammer out the bent front beam and support where the condenser and radiator set. It ain’t very pretty but it’ll do. 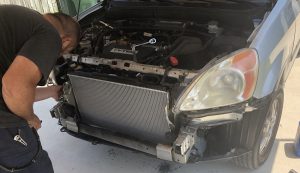 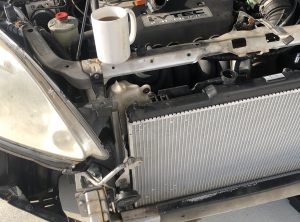 Once the new radiator was in we installed the new condenser. 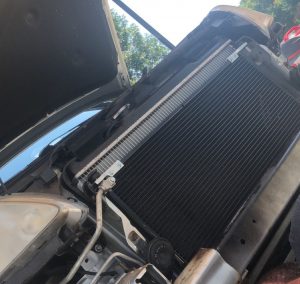 Got everything plumbed up and filled it with anti-freeze, gave it a try and it was still over heating. The antifreeze in the radiator was still cold but the motor was getting hot. For some reason the coolant was not running through the system. Turns out the thermostat was also bad. Not sure if it was damaged cause the car got so hot the night before or what but it needs a new one.

Autozone also had the thermostat in stock so we ran up there to pick one up. It was late in the day on Saturday so we decided to call it a day. I got up early on Sunday AM to replace the thermostat. Man that was a pain in the ass. I tried to access it from under the vehicle like I had seen in a couple YouTube videos, but I just could not get at it. Ended up loosening the brackets on the condenser and radiator so I could move them forward, then I was able to access the thermostat housing from the top.

Installed the new thermostat, refilled the radiator with antifreeze, fired it up, and all seems right with the world, the coolant is pumping through and the engine is maintaining the correct temperature. It’s all put back together now and is good to go for hopefully thousands of more miles.

Probably would have taken a professional a couple hours to do it (maybe less), but it took us the better part of two days. Guessing we probably saved a bunch of money though and I did not have to get up super early this morning to take him to work.

I had hoped to finish up the repairs on the new to me seat I got for the 88′ Sportster (it’s really fucking cool). Maybe next weekend…