Cleaned up the back of the oil tank and prepared the areas which need to be welded up. Used a set of vice grips and some magnets to hold everything in place.

My welds look terrible, but I am pretty confident they will hold. Cleaned them up a little bit – just a little bit since you won’t be able to see them anyway (one day someone will pull this oil tank, maybe me, and say who the hell did that). Hit them with some black paint just to keep down the rust. 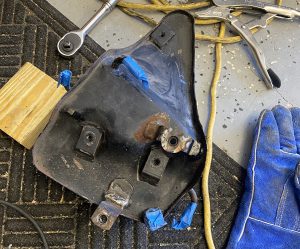 Mounted the oil tank and battery tray back on the bike. Everything fits as it should and you can’t even see my shitty welds. 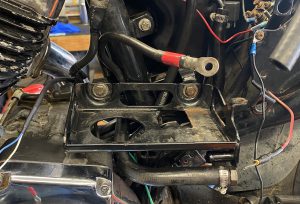 You can see a place on top of the primary where the battery tray was resting and rubbing when the mounts were broken. Shouldn’t have that issue anymore. 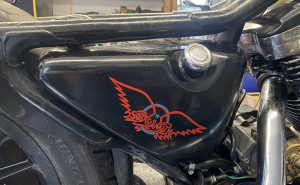 Glad I could save this. Like I said in the post where I discovered this it is definitely not my style or something I would have had done, but it is cool and I am glad I was able to preserve it.

Reconnected all the oil lines and another thing is checked off the list. Now to start wiring her up…