The fork tubes on the 88 Sportster are 8″ over and they are pretty crusty. I was hoping I could save them, but they are too far gone. Lots of pitting especially under the dust cover and just at the seal. So headed over to TC Bros Choppers to pick up a new set of 8 over tubes, it’s money I was hoping to not have to spend, but 🙁

The forks are all pulled apart. The lowers have some flaking chrome but other than that they are in ok shape.

Got the DoD decal off the fork… that was a chore. Need to get them cleaned up the rest of the way.

No way to save this (at least no easy way that I know of, other than replacing them). The pitting on the fork tubes is really bad, right through the chrome down into the metal. 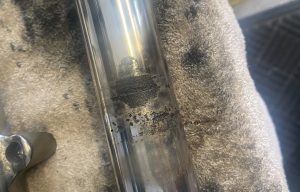 Was really hoping the fork tubes would not be this bad. Oh well, the new 8 over 39mm fork tubes are on the way. I pulled the trees just to check the neck bearings, they seem to be ok. Based on the way everything else looks I was pretty surprised that the neck bearings were is decent shape: cleaned up the neck, repacked the bearings with grease, and put the trees back together. Hope to have the fork tubes later this week and I can get the front end back together.

The Twin Power Shocker Gel Battery arrived last week and I finished up the wiring needed for the switch, ignition, oil light, and neutral light. The oil and neutral light are not permanently wired in yet since I need to finish up the mount, but the wiring is all there. 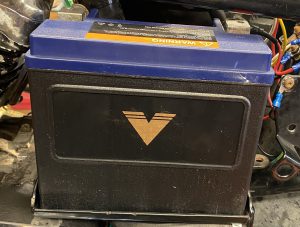 Still have to wire in the lights.

There was some positives that came out of the garage this weekend… Got the carburetor cleaned up and she is running on gasoline now (not just starter fluid). I’ll take that win.