I know, I know it has been a good long while… sue me. Been a busy almost year with work and grandkids and riding and just stuff. I’ll try to do better, but I ain’t making any promises. I have had the 1999 Dyna Wide Glide (FXDWG) for a while now and have put a few miles on it. It is a great bike and fun to ride. I had originally said I was not going to do anything to the bike, but after riding it a bit there are a couple things I need to change. Nothing too fancy or involved, just a couple of changes to make the ride better for me.

First the hand grips. The grips on the bike looked alright, but I did not find them to be very comfortable. In fact they were probably the most uncomfortable grips I have ever experienced. The raised rubber inserts in the middle of the grips were noticeable with or without gloves, and it just bothered me. It bothered me a bit more so on the throttle side. So anyway these grips have to go. 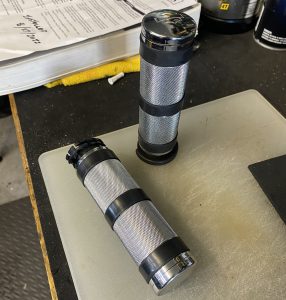 I changed these out to a set of Harley Davidson Get-A-Grip hand grips (Part Number: 56100009). I am running these Get-A-Grip grips on two of my other bikes, the Heritage and the Street Glide, and I really like them. 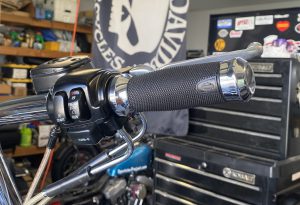 The new grips were easy to install. For the throttle grip I loosened the cables at the adjusters and was able to get enough slack to get the old throttle grip off and the new grip on with out issue. Sprayed a little Red Line cable lube down the cables while I had them apart. The clutch side grip just slips on and is held in place by the switch housing, easy peasy. The Harley Davidson Get-A-Grip hand grips are a little pricey, but I like them. They look good and are way more comfortable, at least for me, than the grips that were on there.

The second issue I needed to address was with the forward controls. The extended forward controls look great on the bike but they are just a little too far forward for me. Bruce, the previous owner, was pretty tall (like 6′ 4″ or something) and it makes since that he would have installed extended forward controls on the bike. For me though, even though I can reach them, it is a bit of a stretch (I am only 5′ 11″) and I find myself missing the pegs from time to time when I am going from a stop with both feet on the ground. I don’t have any issues shifting or braking, but the brake pedal is a bit of a reach which is little sketchy when hard stopping. 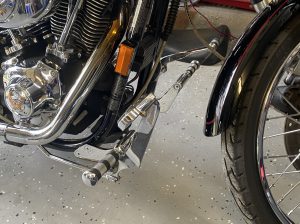 I had a lot of the old take-offs from stuff Bruce replaced, but unfortunately the stock foot control set up is nowhere to be found. After a bit of looking around for options I ended up deciding on this floorboard kit to replace the forward controls. I ordered the kit from Tidewater Motorcycles (they gave me a great deal and had it in a couple days) but you can pick up the V-Twin Manufacturing Floorboard Kit (V-Twin Part Number: 27-0920) for 1996-2005 Dyna models from Amazon or several other online shops.

The floorboard kit has everything needed for the install and all the parts and pieces seem to be decent quality. The installation instructions could be a little better, but they are adequate and it is not to difficult too figure out. Since this bike never had mid-controls (as far as I know) there is no need for the bracket that attaches to the crankcase to secure, or the cap for, the shifter shaft which would run through the primary. 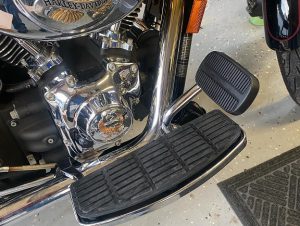 I had seen a couple reviews where folks had issues with the rear bracket on the brake side not clearing the front exhaust bracket. I did not have any issues with fit, everything fit as it should with no clearance issues.

Some people don’t dig the look of floorboards, but I am not some people. I run them on my Heritage, on my Street Glide, and now on my Dyna Wide Glide. I like the look, comfort, and the flexibility in how you can adjust your footing on floorboards, not to mention that in this case it allows me to reach the shifter and brake pedal way more better. I don’t find myself looking like an idiot cause I missed the pegs (there are many of other ways I find myself looking like an idiot). 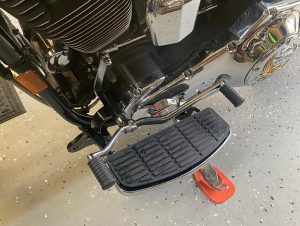 I could take or leave the heal-toe shifter, but since it is what came with the kit it is what I put on there.

After getting everything mounted up I adjusted the rear brake linkage and the shift linkage, everything works as it should. Removal of the forward controls and installation of the floorboard kit took me less than 2 hours. Could have probably been faster, but I wasn’t in a hurry. I used blue loctite where the instructions call for it and on all the bolts which mount the brackets to the frame.

The grandson checked everything out and made sure I put away all the tools. 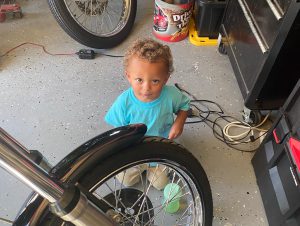 That should be pretty much it, at least for now. I dig everything else about the bike. I like the bars and the upswept fishtail pipes look great. People ask me about the pipes all the time, sorry I don’t know much about them and I can’t find anything stamped on them. At some point I may upgrade the cam chest, since this is a 1999 and is prone to a few problems in there.