Storms looming in the area most of the day on Sunday provided me with an unexpected opportunity to get some tinkering done on the Sporty. Worked on the front cylinder to replace the o-rings on the tappet guides and pushrod covers, adjust the pushrods, and replace the gaskets on the rocker boxes.

Got the Sportster up on the lift and removed the battery, gas tank, and coil. Digging the lift, much easier than working on the floor. Not only does it put the bike in a position which is easy to work on, it also provides a great work surface for tools, beer, parts, manuals, and such (looks a bit junkie but I know exactly where almost everything is). 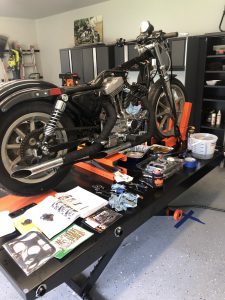 Removed the rocker box cover from the front cylinder. 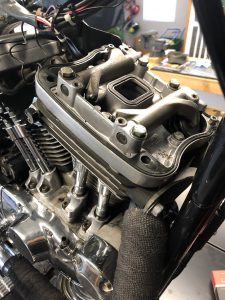 The old gaskets where squished up and malformed. I bought a James Gasket Rocker Cover gasket kit which contained all the o-rings and gaskets I needed for the rocker boxes, pushrod covers, and tappet guides.

I also purchased a chrome rocker box allen screw kit, which had all the external and internal bolts and washers. The screw kit did not include the bolts (OEM 2708A) and washers (OEM 6771A) for the tappet guides. I picked these up from Bayside HD.

Whoever had the rocker boxes off in the past did not use the proper gasket between the rocker box and the heads. It should be a metal gasket. They used some kind of liquid gasket mess, and it was just that – a mess. Got it all cleaned up from both the head and the bottom of the rocker box.

The tappet guides were a bitch to get off. Whoever messed with them last over torqued the bolts. I mean they were really wrenched down hard. This actually probably contributed to the leaking (tighter is not always better). 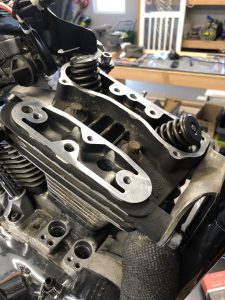 Cleaned up the rocker boxes. They really were not that bad (other than the liquid gasket mess). 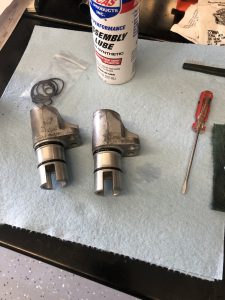 Used a little assembly lube on the o-rings to help get them into place without twisting them. Hopefully this, along with using the proper torque on the bolts, will reduce the amount of oil which was spewing from between the tappet guide and the lower end.

When I reassembled everything I replaced all the o-rings and seals on the pushrod tubes and covers as well.

The pushrods had a lot of slop in them, especially the front exhaust pushrod. The exhaust pushrod was so far out of adjustment it would not even stay in the seat. When I had the bike running it had a bad tap, but I had no idea it was that bad. Adjusted both the intake and exhaust pushrods, it should run much better with a lot less noise (I hope).

Assembled the rocker box with the proper gaskets. Torqued everything down to specs. Looks good all buttoned up. 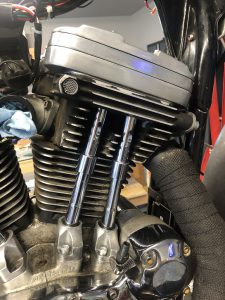 Front is done, not sure when I’ll get a chance to do the rear but hopefully soon.