The other night I was just browsing the market place on Facebook looking at motorcycles and motorcycle parts. Not really looking to buy anything, just looking at what was out there. This crusty old 1988 Sportster 883 Evolution engine caught my eye. I reached out to the seller and it was still available so Sandy and I took a drive up to where it was to have a look at it. It’s kind of mostly there, old, and extremely dirty. The seller tells me it has not been run since 1999. The price was right so now it’s mine. Let the next project begin…

The Sportster engine is pretty crusty. Almost looks like part of it was buried in the mud for a while. I pulled the primary cover and it is pretty clean inside the primary. Actually the primary is pretty much complete and looks to be in fairly good shape. I’ll end up pulling it apart, along with the transmission, just to check everything out. 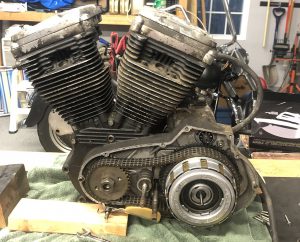 Also pulled the rocker boxes and heads just to check things out. Things don’t look too terrible other than it is just really dirty. The cylinders look good, but I have not pulled them yet. Hopefully the bottom end is in good shape. The top end is going to get rebuilt for sure. 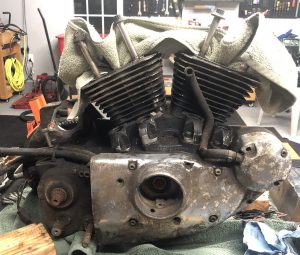 Look at all that crustiness on the cam cover. The primary cover looks twice as crusty. I’ll clean these up but they will probably still look a bit crusty.

Going to start putting together a list of things its going to need to get the motor going. After a quick once over here are some of the things I know I am going to need:

Once I get the motor right I’ll start thinking about what I want to do with it.