Rode motorcycles, smoked cigars, and made a lot of progress on the Sportster over the weekend. Everything is pretty much cleaned up and going back together. Got the pistons and cylinders assembled. Then put together the cams, pushrods, and rocker boxes. Cleaned up and tested the starter, and got the primary put back together. Plenty of progress, hoping to test firing her up next weekend.

Picked up a set of pistons and cylinders from a 2000 1200 Sportster on eBay. They were in really good shape. Ran a hone through them and Cory stopped by to help me get them assembled. 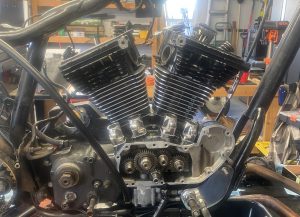 New base gaskets and head gaskets. Replaced the valve seals and reassembled the heads. Head bolts are torqued. The oil pump is mounted. Installed the cams and set the time marks.

Previous owner had removed the oil pressure switch and put a plug in it’s place. I am all for less is more and cleaning up the wiring, but I think an oil pressure switch is something that should not be left off. Loss of oil pressure is your first indication that things are about to go really bad, really fast. 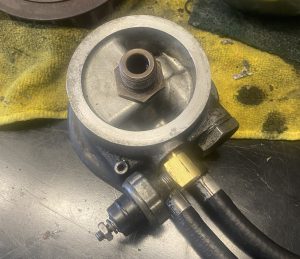 The way the motor mounts and frame is set up there is not room for oil pressure switch to be mounted straight down. Removed the oil filter mount and added an elbow so the switch will fit under the oil filter. Once she starts I am going to build a custom mount for the ignition switch, oil pressure light, and neutral light.

Pulled the carburetor and intake manifold from the 1990 Sportster to use temporarily. 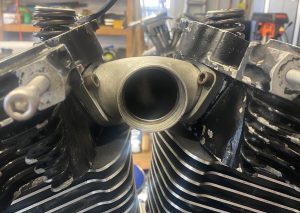 If, or should I say when, she runs I’ll pick up another manifold and carb so I can get the 90 put back together.

The pushrods are in, the rocker boxes are on, and the cam chest is buttoned up. Tappet blocks and pushrod covers got new o-rings and seals, also replaced the oil lines. 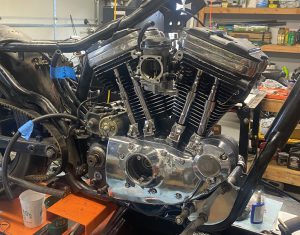 The cam chest cover is crusty and so are the rocker boxes, cleaned them up the best I could – the chrome is flaking off and there is a lot of oxidation on the metal where the chrome has flaked off, but all the gasket surfaces are fine so I don’t think she will leak. The rear rocker box is really crusty, I had another rocker box, but it was from an earlier year and the gaskets I have did not fit it, so the old crusty rocker box went back on. Cleaned up the starter, tested it (it works!), and installed it.

The primary cover cleaned up nice. Replaced the gaskets and seals and primary side is all buttoned up. 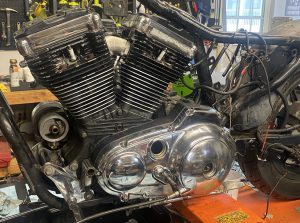 Have to pick up some primary oil, I thought I had a quart but I don’t so I’ll get to Tidewater Motorcycles this week to pick some up.

Here is a list of things I think I still need to do before I can try to start her:

Probably more… but I think that covers most of what needs to happen to try and run her.

I have got to get my work area cleaned up some, lot of clutter, dirt, and extra parts. I keep dropping shit in the oil pan I have under the bike so I need to get that out of the way. Will get the ignition and coil wired up later this week, try to tackle a few other things on the list, and hope to try to start her next weekend.

Cory asked me if I was going to leave it crusty… told him probably… he said yeah that’s kind of your style. I guess if I have to have a style I am ok with crusty.