Did some tinkering on the bike this evening after work. When I tore things down and I pulled the exhaust off two of the four studs, one in the front and one in the rear, came out with the nut so I decided to just try and replace them all with new studs.

Here is a video that walks through one method (and the method that worked for me on one of the two studs which remained in the head) for removing the old studs.

Yeah I know he is working on a car engine block. Same same for what we are talking about here.

Anyway this method worked like a charm on the remaining rear stud. Here are the two nuts locked down on the old rear exhaust stud. It backed right out. 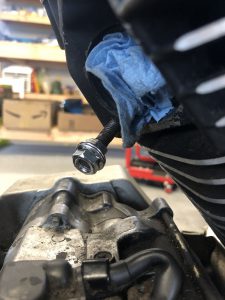 Be careful doing this if things don’t move. One of the front ones I could not get out, so just going with it for now, was just scared to break it off in the head. Last thing you want to do is try to force things and break a stud off in the head (been there, done that, it ain’t fun).

All the old exhaust studs, except for one of the front ones, are removed and the new studs are in place. The old exhaust gaskets were pretty much squished to nothing and falling apart (probably been on there forever), so new ones will go on when I mount the exhaust. 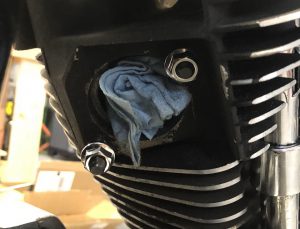 Also, got the last isolation mount I needed so I put the battery tray on.

The battery tray got a 10 foot fix a couple weekends ago (took a wire brush to it and hit it with some engine paint). All mounted up, looking pretty, and ready for the battery.