Had to do a little work on the wife’s 1999 Honda Shadow. It has been setting awhile. Thanksgiving weekend the weather was great and she wanted to take it out for a ride, it started and idled just fine but would not stay running when you opened the throttle.

Since it has been sitting for a good while I figured the carburetors where probably gummed up. Put the bike up on the lift and pulled the carbs. Man they don’t make those things easy to remove, but they are off and I think I know how to get it back together 🙂 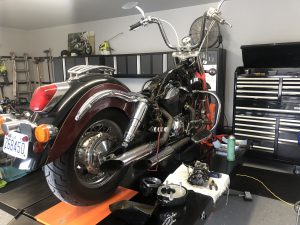 Well there’s the problem. Both carbs are full of junk. Pretty much everything is clogged up. Not really sure how it even ran in the first place. 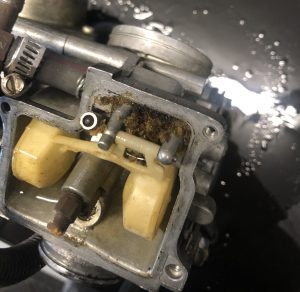 The tank has a bunch of sludge in it as well, so going to have to figure out how to clean that out. Will be replacing the fuel filter as well.

Got things mostly cleaned up and ordered the rebuild kits, which should be here by next weekend. 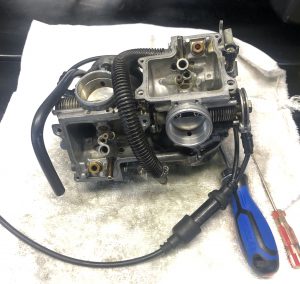 Blew compressed air through the main and idle jet passages and all the passages seem to be open now.

Need to give the jets a good cleaning. The float needle and seat will get replaced. 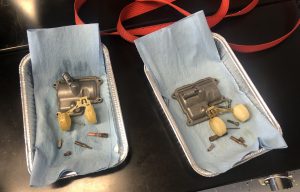 Since it has been sitting, I ‘ll probably go ahead and change the oil and such while it is up in the air.

These things don’t like to just sit. Once I get it all put back together it should run like new… I hope.