I have been doing a lot of working on motorcycles lately and not nearly enough riding. I wanted to put a plan together for me and Sandy to do something cool over the summer. I did an Iron Butt SaddleSore 1000, 1000 miles in less than 24 hours, back a bunch of years ago (would have been in early 2Kx, maybe late 199x – I don’t remember) on the Heritage but I never sent in the documentation to have it certified. Over the years Sandy and I have done several 1000 mile days together traveling to St Louis in a day and also New Orleans in a single day – both of these destinations are about 1000 miles out. I would like to set out to do a certified Iron Butt SaddleSore 1000 Ride 2-up with Sandy.

For this we would ride on the 2014 Street Glide. Might as well do it in comfort, with a radio. Will see how this one goes and maybe one day I’ll attempt it on the 1992 project. Would be pretty awesome accomplish it on a hardtail bike, powered by a nearly 30 year old engine, that I built myself.

Route Thoughts:
We could head south: Home to Brunswick, GA to Home 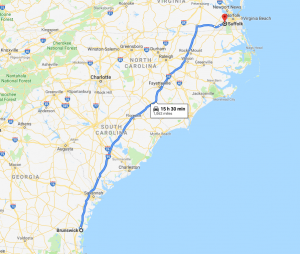 or we could head west: Home to Morehead, KY to Home

Both of these routes are just over 1000 miles, would be mostly Interstate, and would be easy to document. The time shown on the map screenshot above are the round trip times, of course it would be a bit longer than this due to stops for fuel, food, and rest. I am leaning towards going the southern route, less turns to document – We’ll start in Suffolk and pretty much just take 58 to 95 and back again (the leg of 58 from 95 to home will no doubt be the longest 60 miles ever). I am also really familiar with that route since it’s the same way we head down to Daytona Beach for Biketoberfest every year. Thinking of attempting it on a weekend in August – start early in the morning, be home late evening. Would be a long 16-18 hour ride but it is not anything we haven’t done before.

Target Dates:
Saturday, August 17, 2019
Saturday, August 24, 2019
If neither of these dates work out due to weather (hey I’ll ride in whatever weather, but not sure I want to set out on a 1000 mile day ride in the pouring rain), finding a start/end witness, or whatever then we will look at weekends in September.

This is not a race, just a personal challenge to complete the ride and submit the paper work. Not even sure why I started looking into it again, but… I am, would be a pretty neat accomplishment, so we will. Got to find someone willing to meet us early in the morning for the start and be on call to meet us at the finish to certify things.

Looking forward to giving it a try. Like I said it’s not anything we haven’t done before, this time we will just document the ride and submit it to the Iron Butt Association for certification. Who knows, while planning this out I may change it up and look at attempting the Bun Burner 1500 – which is 1500 miles in less than 36 hours, but for now just going to focus on the 1000 in 24.