The weather has been awesome the last few days. This afternoon I opened up the garage doors and did a little cutting and grinding on the frame of the Evo project. The frame of the roller I purchased was set up for split fat bob style fuel tanks. I had to cut off the mounts so the indented Sportster style tank would sit right.

The picture below shows the tabs and the threaded bungs welded to the top tube of the frame which would be used for split fatbob tanks. 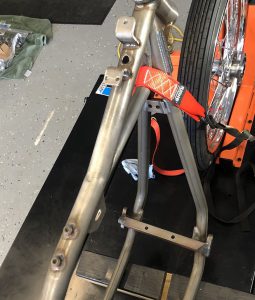 I cut them off using my Ryobi One+ reciprocating saw. 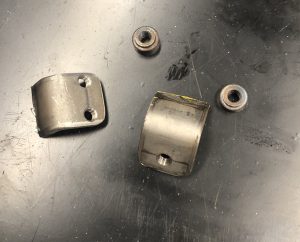 Then used my angle grinder to knock down what was left. 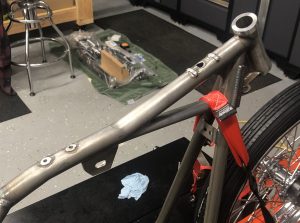 Still have some work to do here to clean this up. The hole in the middle of the top tube would be used for the speedo cable for a dash on fat bob tanks. I still have not decided what I am going to do about a speedometer (if it is even going to have one) but it won’t be in a dash on the tank.

The tank looks great on the frame. 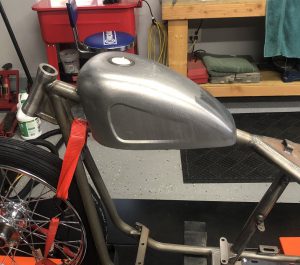 Now I have to get the correct mounts for the tank mounted on the frame, but that’s another post on another day…